Storm Compatibility in Apache Flink: How to run existing Storm topologies on Flink

Apache Storm was one of the first distributed and scalable stream processing systems available in the open source space offering (near) real-time tuple-by-tuple processing semantics. Initially released by the developers at Backtype in 2011 under the Eclipse open-source license, it became popular very quickly. Only shortly afterwards, Twitter acquired Backtype. Since then, Storm has been growing in popularity, is used in production at many big companies, and is the de-facto industry standard for big data stream processing. In 2013, Storm entered the Apache incubator program, followed by its graduation to top-level in 2014.

Apache Flink is a stream processing engine that improves upon older technologies like Storm in several dimensions, including strong consistency guarantees (“exactly once”), a higher level DataStream API, support for event time and a rich windowing system, as well as superior throughput with competitive low latency.

While Flink offers several technical benefits over Storm, an existing investment on a codebase of applications developed for Storm often makes it difficult to switch engines. For these reasons, as part of the Flink 0.10 release, Flink ships with a Storm compatibility package that allows users to:

Only minor code changes are required in order to submit the program to Flink instead of Storm. This minimizes the work for developers to run existing Storm topologies while leveraging Apache Flink’s fast and robust execution engine.

We note that the Storm compatibility package is continuously improving and does not cover the full spectrum of Storm’s API. However, it is powerful enough to cover many use cases. 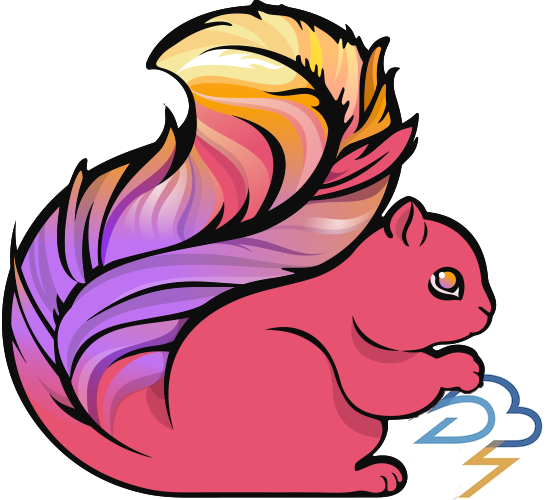 The easiest way to use the Storm compatibility package is by executing a whole Storm topology in Flink. For this, you only need to replace the dependency storm-core by flink-storm in your Storm project and change two lines of code in your original Storm program.

The following example shows a simple Storm-Word-Count-Program that can be executed in Flink. First, the program is assembled the Storm way without any code change to Spouts, Bolts, or the topology itself.

In order to execute the topology, we need to translate it to a FlinkTopology and submit it to a local or remote Flink cluster, very similar to submitting the application to a Storm cluster.1

As a shorter Flink-style alternative that replaces the Storm-style submission code, you can also use context-based job execution:

After the code is packaged in a jar file (e.g., StormWordCount.jar), it can be easily submitted to Flink via

The used Spouts and Bolts as well as the topology assemble code is not changed at all! Only the translation and submission step have to be changed to the Storm-API compatible Flink pendants. This allows for minimal code changes and easy adaption to Flink.

It is also possible to use Spouts and Bolts within a regular Flink DataStream program. The compatibility package provides wrapper classes for Spouts and Bolts which are implemented as a Flink SourceFunction and StreamOperator respectively. Those wrappers automatically translate incoming Flink POJO and TupleXX records into Storm’s Tuple type and emitted Values back into either POJOs or TupleXX types for further processing by Flink operators. As Storm is type agnostic, it is required to specify the output type of embedded Spouts/Bolts manually to get a fully typed Flink streaming program.

Although some boilerplate code is needed (we plan to address this soon!), the actual embedded Spout and Bolt code can be used unmodified. We also note that the resulting program is fully typed, and type errors will be found by Flink’s type extractor even if the original Spouts and Bolts are not.

The Storm compatibility package is currently in beta and undergoes continuous development. We are currently working on providing consistency guarantees for stateful Bolts. Furthermore, we want to provide a better API integration for embedded Spouts and Bolts by providing a “StormExecutionEnvironment” as a special extension of Flink’s StreamExecutionEnvironment. We are also investigating the integration of Storm’s higher-level programming API Trident.

Flink’s compatibility package for Storm allows using unmodified Spouts and Bolts within Flink. This enables you to even embed third-party Spouts and Bolts where the source code is not available. While you can embed Spouts/Bolts in a Flink program and mix-and-match them with Flink operators, running whole topologies is the easiest way to get started and can be achieved with almost no code changes.

If you want to try out Flink’s Storm compatibility package checkout our Documentation.

1. We confess, there are three lines changed compared to a Storm project

—because the example covers local and remote execution. ↩