In a previous blog post, we presented how Flink’s network stack works from the high-level abstractions to the low-level details. This second blog post in the series of network stack posts extends on this knowledge and discusses monitoring network-related metrics to identify effects such as backpressure or bottlenecks in throughput and latency. Although this post briefly covers what to do with backpressure, the topic of tuning the network stack will be further examined in a future post. If you are unfamiliar with the network stack we highly recommend reading the network stack deep-dive first and then continuing here.

Probably the most important part of network monitoring is monitoring backpressure, a situation where a system is receiving data at a higher rate than it can process¹. Such behaviour will result in the sender being backpressured and may be caused by two things:

1 In case you are unfamiliar with backpressure and how it interacts with Flink, we recommend reading through this blog post on backpressure from 2015.

If backpressure occurs, it will bubble upstream and eventually reach your sources and slow them down. This is not a bad thing per-se and merely states that you lack resources for the current load. However, you may want to improve your job so that it can cope with higher loads without using more resources. In order to do so, you need to find (1) where (at which task/operator) the bottleneck is and (2) what is causing it. Flink offers two mechanisms for identifying where the bottleneck is:

Flink’s web UI is likely the first entry point for a quick troubleshooting but has some disadvantages that we will explain below. On the other hand, Flink’s network metrics are better suited for continuous monitoring and reasoning about the exact nature of the bottleneck causing backpressure. We will cover both in the sections below. In both cases, you need to identify the origin of backpressure from the sources to the sinks. Your starting point for the current and future investigations will most likely be the operator after the last one that is experiencing backpressure. This specific operator is also highly likely to cause the backpressure in the first place.

Although you can tune things like the refresh-interval, the number of samples, or the delay between samples, normally, you would not need to touch these since the defaults already give good-enough results. 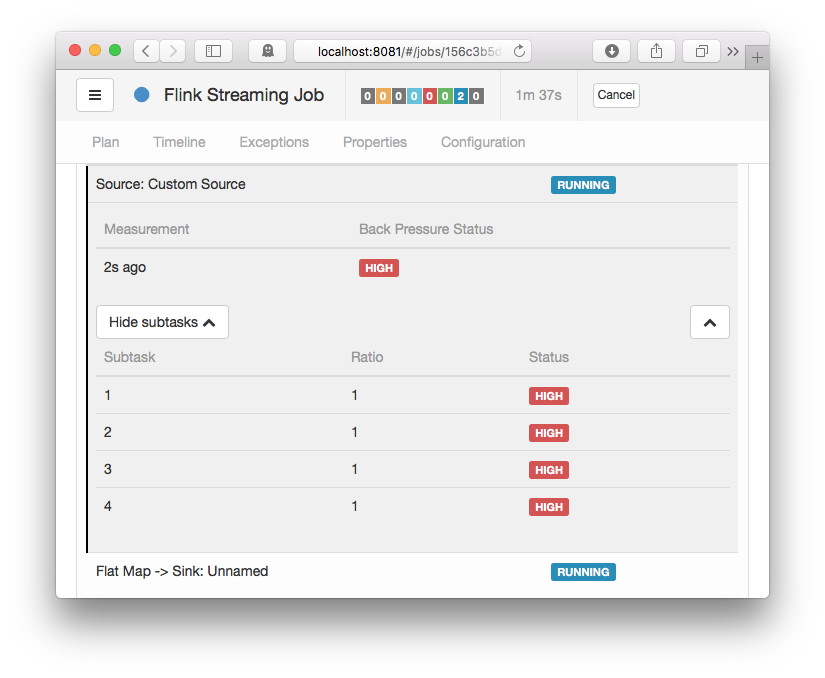 2 You may also access the backpressure monitor via the REST API: /jobs/:jobid/vertices/:vertexid/backpressure

The backpressure monitor can help you find where (at which task/operator) backpressure originates from. However, it does not support you in further reasoning about the causes of it. Additionally, for larger jobs or higher parallelism, the backpressure monitor becomes too crowded to use and may also take some time to gather all information from all TaskManagers. Please also note that sampling may affect your running job’s performance.

Network and task I/O metrics are more lightweight than the backpressure monitor and are continuously published for each running job. We can leverage those and get even more insights, not only for backpressure monitoring. The most relevant metrics for users are:

Warning For the sake of completeness and since they have been used in the past, we will briefly look at the outputQueueLength and inputQueueLength metrics. These are somewhat similar to the [out,in]PoolUsage metrics but show the number of buffers sitting in a sender subtask’s output queues and in a receiver subtask’s input queues, respectively. Reasoning about absolute numbers of buffers, however, is difficult and there is also a special subtlety with local channels: since a local input channel does not have its own queue (it works with the output queue directly), its value will always be 0 for that channel (see FLINK-12576) and for the case where you only have local input channels, then inputQueueLength = 0.

Overall, we discourage the use of outputQueueLength and inputQueueLength because their interpretation highly depends on the current parallelism of the operator and the configured numbers of exclusive and floating buffers. Instead, we recommend using the various *PoolUsage metrics which even reveal more detailed insight.

Note If you reason about buffer usage, please keep the following in mind:

The following sections make use of and combine these metrics to reason about backpressure and resource usage / efficiency with respect to throughput. A separate section will detail latency related metrics.

Backpressure may be indicated by two different sets of metrics: (local) buffer pool usages as well as input/output queue lengths. They provide a different level of granularity but, unfortunately, none of these are exhaustive and there is room for interpretation. Because of the inherent problems with interpreting these queue lengths we will focus on the usage of input and output pools below which also provides more detail.

The following table summarises all combinations and their interpretation. Bear in mind, though, that backpressure may be minor or temporary (no need to look into it), on particular channels only, or caused by other JVM processes on a particular TaskManager, such as GC, synchronisation, I/O, resource shortage, instead of a specific subtask.

We may even reason more about the cause of backpressure by looking at the network metrics of the subtasks of two consecutive tasks:

Backpressure can also be caused by all parallel instances of a task or by a single task instance. The first usually happens because the task is performing some time consuming operation that applies to all input partitions. The latter is usually the result of some kind of skew, either data skew or resource availability/allocation skew. In either case, you can find some hints on how to handle such situations in the What to do with backpressure? box below.

3 this should not happen

Besides the obvious use of each individual metric mentioned above, there are also a few combinations providing useful insight into what is happening in the network stack:

What to do with Backpressure?

Please also recall that backpressure might be temporary and the result of a load spike, checkpointing, or a job restart with a data backlog waiting to be processed. In that case, you can often just ignore it. Alternatively, keep in mind that the process of analysing and solving the issue can be affected by the intermittent nature of your bottleneck. Having said that, here are a couple of things to check.

Firstly, you should check the incriminated machines’ basic resource usage like CPU, network, or disk I/O. If some resource is fully or heavily utilised you can do one of the following:

Oftentimes, performance issues arise from long GC pauses. You can verify whether you are in such a situation by either printing debug GC logs (via -XX:+PrintGCDetails) or by using some memory/GC profilers. Since dealing with GC issues is highly application-dependent and independent of Flink, we will not go into details here (Oracle’s Garbage Collection Tuning Guide or Plumbr’s Java Garbage Collection handbook seem like a good start).

Sometimes a CPU bottleneck might not be visible at first glance if one or a couple of threads are causing the CPU bottleneck while the CPU usage of the overall machine remains relatively low. For instance, a single CPU-bottlenecked thread on a 48-core machine would result in only 2% CPU use. Consider using code profilers for this as they can identify hot threads by showing each threads’ CPU usage, for example.

Similarly to the CPU/thread bottleneck issue above, a subtask may be bottlenecked due to high thread contention on shared resources. Again, CPU profilers are your best friend here! Consider looking for synchronisation overhead / lock contention in user code — although adding synchronisation in user code should be avoided and may even be dangerous! Also consider investigating shared system resources. The default JVM’s SSL implementation, for example, can become contented around the shared /dev/urandom resource.

If your bottleneck is caused by data skew, you can try to remove it or mitigate its impact by changing the data partitioning to separate heavy keys or by implementing local/pre-aggregation.

This list is far from exhaustive. Generally, in order to reduce a bottleneck and thus backpressure, first analyse where it is happening and then find out why. The best place to start reasoning about the “why” is by checking what resources are fully utilised.

Tracking latencies at the various locations they may occur is a topic of its own. In this section, we will focus on the time records wait inside Flink’s network stack — including the system’s network connections. In low throughput scenarios, these latencies are influenced directly by the output flusher via the buffer timeout parameter or indirectly by any application code latencies. When processing a record takes longer than expected or when (multiple) timers fire at the same time — and block the receiver from processing incoming records — the time inside the network stack for following records is extended dramatically. We highly recommend adding your own metrics to your Flink job for better latency tracking in your job’s components and a broader view on the cause of delays.

Flink offers some support for tracking the latency of records passing through the system (outside of user code). However, this is disabled by default (see below why!) and must be enabled by setting a latency tracking interval either in Flink’s configuration via metrics.latency.interval or via ExecutionConfig#setLatencyTrackingInterval(). Once enabled, Flink will collect latency histograms based on the granularity defined via metrics.latency.granularity:

These metrics are collected through special “latency markers”: each source subtask will periodically emit a special record containing the timestamp of its creation. The latency markers then flow alongside normal records while not overtaking them on the wire or inside a buffer queue. However, a latency marker does not enter application logic and is overtaking records there. Latency markers therefore only measure the waiting time between the user code and not a full “end-to-end” latency. User code indirectly influences these waiting times, though!

Since LatencyMarkers sit in network buffers just like normal records, they will also wait for the buffer to be full or flushed due to buffer timeouts. When a channel is on high load, there is no added latency by the network buffering data. However, as soon as one channel is under low load, records and latency markers will experience an expected average delay of at most buffer_timeout / 2. This delay will add to each network connection towards a subtask and should be taken into account when analysing a subtask’s latency metric.

By looking at the exposed latency tracking metrics for each subtask, for example at the 95th percentile, you should nevertheless be able to identify subtasks which are adding substantially to the overall source-to-sink latency and continue with optimising there.

Note Flink’s latency markers assume that the clocks on all machines in the cluster are in sync. We recommend setting up an automated clock synchronisation service (like NTP) to avoid false latency results.

Warning Enabling latency metrics can significantly impact the performance of the cluster (in particular for subtask granularity) due to the sheer amount of metrics being added as well as the use of histograms which are quite expensive to maintain. It is highly recommended to only use them for debugging purposes.

In the previous sections we discussed how to monitor Flink’s network stack which primarily involves identifying backpressure: where it occurs, where it originates from, and (potentially) why it occurs. This can be executed in two ways: for simple cases and debugging sessions by using the backpressure monitor; for continuous monitoring, more in-depth analysis, and less runtime overhead by using Flink’s task and network stack metrics. Backpressure can be caused by the network layer itself but, in most cases, is caused by some subtask under high load. These two scenarios can be distinguished from one another by analysing the metrics as described above. We also provided some hints at monitoring resource usage and tracking network latencies that may add up from sources to sinks.

Stay tuned for the third blog post in the series of network stack posts that will focus on tuning techniques and anti-patterns to avoid.