The Apache Flink community is pleased to announce the availability of the 0.10.0 release. The community put significant effort into improving and extending Apache Flink since the last release, focusing on data stream processing and operational features. About 80 contributors provided bug fixes, improvements, and new features such that in total more than 400 JIRA issues could be resolved.

For Flink 0.10.0, the focus of the community was to graduate the DataStream API from beta and to evolve Apache Flink into a production-ready stream data processor with a competitive feature set. These efforts resulted in support for event-time and out-of-order streams, exactly-once guarantees in the case of failures, a very flexible windowing mechanism, sophisticated operator state management, and a highly-available cluster operation mode. Flink 0.10.0 also brings a new monitoring dashboard with real-time system and job monitoring capabilities. Both batch and streaming modes of Flink benefit from the new high availability and improved monitoring features. Needless to say that Flink 0.10.0 includes many more features, improvements, and bug fixes.

We encourage everyone to download the release and check out the documentation. Feedback through the Flink mailing lists is, as always, very welcome!

Many stream processing applications consume data from sources that produce events with associated timestamps such as sensor or user-interaction events. Very often, events have to be collected from several sources such that it is usually not guaranteed that events arrive in the exact order of their timestamps at the stream processor. Consequently, stream processors must take out-of-order elements into account in order to produce results which are correct and consistent with respect to the timestamps of the events. With release 0.10.0, Apache Flink supports event-time processing as well as ingestion-time and processing-time processing. See FLINK-2674 for details.

Operators that maintain and update state are a common pattern in many stream processing applications. Since streaming applications tend to run for a very long time, operator state can become very valuable and impossible to recompute. In order to enable fault-tolerance, operator state must be backed up to persistent storage in regular intervals. Flink 0.10.0 offers flexible interfaces to define, update, and query operator state and hooks to connect various state backends.

Stream processing applications may be live for months. Therefore, a production-ready stream processor must be highly-available and continue to process data even in the face of failures. With release 0.10.0, Flink supports high availability modes for standalone cluster and YARN setups, eliminating any single point of failure. In this mode, Flink relies on Apache Zookeeper for leader election and persisting small sized meta-data of running jobs. You can check out the documentation to see how to enable high availability. See FLINK-2287 for details.

The DataStream API was revised based on user feedback and with foresight for upcoming features and graduated from beta status to fully supported. The most obvious changes are related to the methods for stream partitioning and window operations. The new windowing system is based on the concepts of window assigners, triggers, and evictors, inspired by the Dataflow Model. The new API is fully described in the DataStream API documentation. This migration guide will help to port your Flink 0.9 DataStream programs to the revised API of Flink 0.10.0. See FLINK-2674 and FLINK-2877 for details.

Apache Flink 0.10.0 features DataStream sources and sinks for many common data producers and stores. This includes an exactly-once rolling file sink which supports any file system, including HDFS, local FS, and S3. We also updated the Apache Kafka producer to use the new producer API, and added a connectors for ElasticSearch and Apache Nifi. More connectors for DataStream programs will be added by the community in the future. See the following JIRA issues for details FLINK-2583, FLINK-2386, FLINK-2372, FLINK-2740, and FLINK-2558.

The 0.10.0 release features a newly designed and significantly improved monitoring dashboard for Apache Flink. The new dashboard visualizes the progress of running jobs and shows real-time statistics of processed data volumes and record counts. Moreover, it gives access to resource usage and JVM statistics of TaskManagers including JVM heap usage and garbage collection details. The following screenshot shows the job view of the new dashboard. 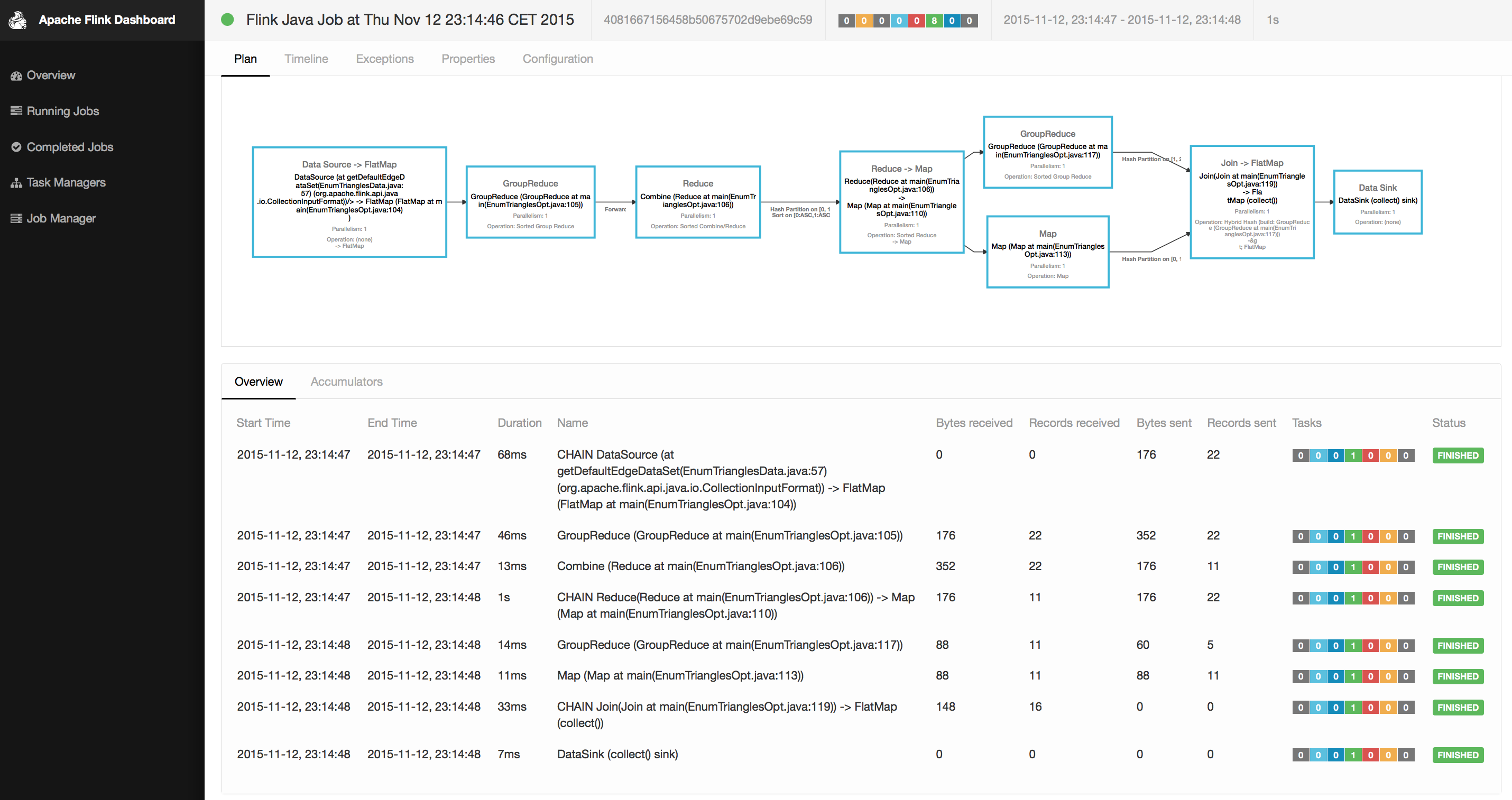 The web server that provides all monitoring statistics has been designed with a REST interface allowing other systems to also access the internal system metrics. See FLINK-2357 for details.

Outer joins have been one of the most frequently requested features for Flink’s DataSet API. Although there was a workaround to implement outer joins as CoGroup function, it had significant drawbacks including added code complexity and not being fully memory-safe. With release 0.10.0, Flink adds native support for left, right, and full outer joins to the DataSet API. All outer joins are backed by a memory-safe operator implementation that leverages Flink’s managed memory. See FLINK-687 and FLINK-2107 for details.

Gelly is Flink’s API and library for processing and analyzing large-scale graphs. Gelly was introduced with release 0.9.0 and has been very well received by users and contributors. Based on user feedback, Gelly has been improved since then. In addition, Flink 0.10.0 introduces a Scala API for Gelly. See FLINK-2857 and FLINK-1962 for details.

The Flink community resolved more than 400 issues. The following list is a selection of new features and fixed bugs.

As previously announced, Flink 0.10.0 no longer supports Java 6. If you are still using Java 6, please consider upgrading to Java 8 (Java 7 ended its free support in April 2015). Also note that some methods in the DataStream API had to be renamed as part of the API rework. For example the groupBy method has been renamed to keyBy and the windowing API changed. This migration guide will help to port your Flink 0.9 DataStream programs to the revised API of Flink 0.10.0.