Gelly allows Flink users to perform end-to-end data analysis in a single system. Gelly can be seamlessly used with Flink’s DataSet API, which means that pre-processing, graph creation, analysis, and post-processing can be done in the same application. At the end of this post, we will go through a step-by-step example in order to demonstrate that loading, transformation, filtering, graph creation, and analysis can be performed in a single Flink program.

Gelly is a Graph API for Flink. It is currently supported in both Java and Scala. The Scala methods are implemented as wrappers on top of the basic Java operations. The API contains a set of utility functions for graph analysis, supports iterative graph processing and introduces a library of graph algorithms.

A graph can be created from:

In all three cases, if the vertices are not provided, Gelly will automatically produce the vertex IDs from the edge source and target IDs.

These are methods of the Graph class and include common graph metrics, transformations and mutations as well as neighborhood aggregations.

These methods can be used to retrieve several graph metrics and properties, such as the number of vertices, edges and the node degrees.

The transformation methods enable several Graph operations, using high-level functions similar to the ones provided by the batch processing API. These transformations can be applied one after the other, yielding a new Graph after each step, in a fashion similar to operators on DataSets:

Transformations can be applied on:

Neighborhood methods allow vertices to perform an aggregation on their first-hop neighborhood. This provides a vertex-centric view, where each vertex can access its neighboring edges and neighbor values.

reduceOnEdges() provides access to the neighboring edges of a vertex, i.e. the edge value and the vertex ID of the edge endpoint. In order to also access the neighboring vertices’ values, one should call the reduceOnNeighbors() function. The scope of the neighborhood is defined by the EdgeDirection parameter, which can be IN, OUT or ALL, to gather in-coming, out-going or all edges (neighbors) of a vertex.

The two neighborhood functions mentioned above can only be used when the aggregation function is associative and commutative. In case the function does not comply with these restrictions or if it is desirable to return zero, one or more values per vertex, the more general groupReduceOnEdges() and groupReduceOnNeighbors() functions must be called.

Consider the following graph, for instance: 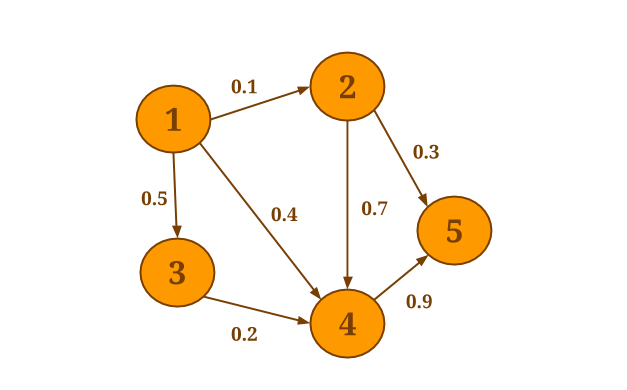 Assume you would want to compute the sum of the values of all incoming neighbors for each vertex. We will call the reduceOnNeighbors() aggregation method since the sum is an associative and commutative operation and the neighbors’ values are needed:

The vertex with id 1 is the only node that has no incoming edges. The result is therefore:

During the past few years, many different programming models for distributed graph processing have been introduced: vertex-centric, partition-centric, gather-apply-scatter, edge-centric, neighborhood-centric. Each one of these models targets a specific class of graph applications and each corresponding system implementation optimizes the runtime respectively. In Gelly, we would like to exploit the flexible dataflow model and the efficient iterations of Flink, to support multiple distributed graph processing models on top of the same system.

Currently, Gelly has methods for writing vertex-centric programs and provides support for programs implemented using the gather-sum(accumulate)-apply model. We are also considering to offer support for the partition-centric computation model, using Fink’s mapPartition() operator. This model exposes the partition structure to the user and allows local graph structure exploitation inside a partition to avoid unnecessary communication.

The method will execute the vertex-centric iteration on the input Graph and return a new Graph, with updated vertex values.

Gelly’s vertex-centric programming model exploits Flink’s efficient delta iteration operators. Many iterative graph algorithms expose non-uniform behavior, where some vertices converge to their final value faster than others. In such cases, the number of vertices that need to be recomputed during an iteration decreases as the algorithm moves towards convergence.

For example, consider a Single Source Shortest Paths problem on the following graph, where S is the source node, i is the iteration counter and the edge values represent distances between nodes: 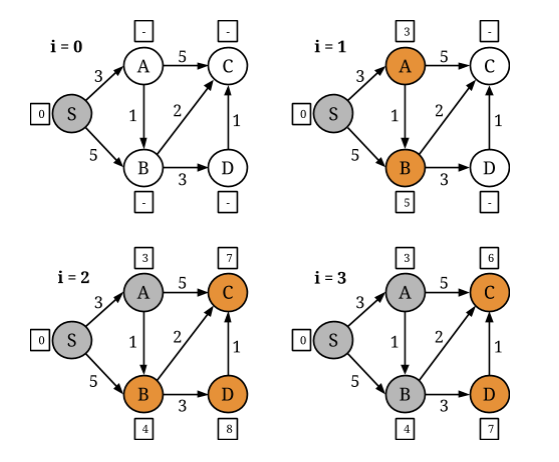 Flink’s IterateDelta operator permits exploitation of this property as well as the execution of computations solely on the active parts of the graph. The operator receives two inputs:

In the SSSP example above, the Workset contains the vertices which update their distances. The user-defined iterative function is applied on these inputs to produce state updates. These updates are efficiently applied on the state, which is kept in memory. 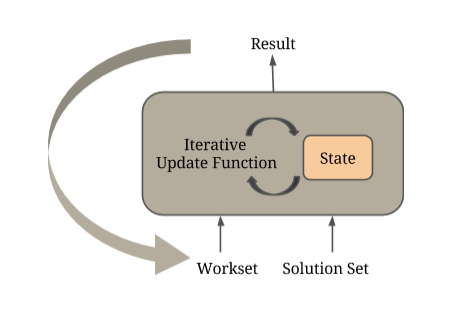 Internally, a vertex-centric iteration is a Flink delta iteration, where the initial Solution Set is the vertex set of the input graph and the Workset is created by selecting the active vertices, i.e. the ones that updated their value in the previous iteration. The messaging and vertex-update functions are user-defined functions wrapped inside coGroup operators. In each superstep, the active vertices (Workset) are coGrouped with the edges to generate the neighborhoods for each vertex. The messaging function is then applied on each neighborhood. Next, the result of the messaging function is coGrouped with the current vertex values (Solution Set) and the user-defined vertex-update function is applied on the result. The output of this coGroup operator is finally used to update the Solution Set and create the Workset input for the next iteration. 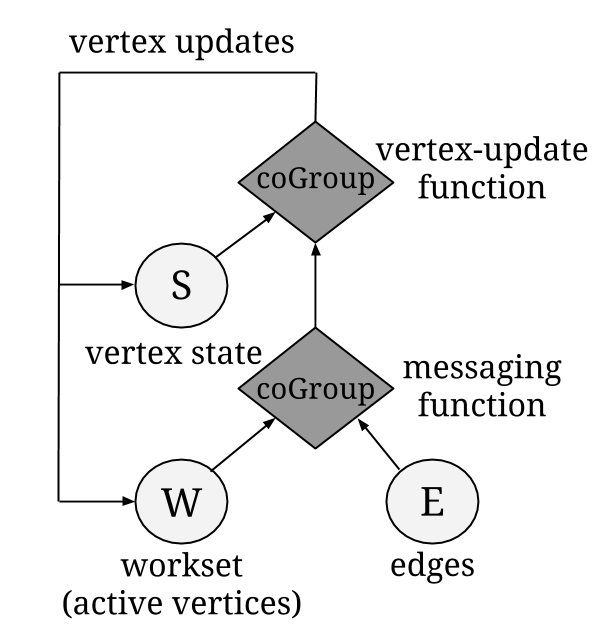 Gelly supports a variation of the popular Gather-Sum-Apply-Scatter computation model, introduced by PowerGraph. In GSA, a vertex pulls information from its neighbors as opposed to the vertex-centric approach where the updates are pushed from the incoming neighbors. The runGatherSumApplyIteration() accepts three user-defined functions:

Similarly to vertex-centric, GSA leverages Flink’s delta iteration operators as, in many cases, vertex values do not need to be recomputed during an iteration.

Let us reconsider the Single Source Shortest Paths algorithm. In each iteration, a vertex:

Internally, a Gather-Sum-Apply Iteration is a Flink delta iteration where the initial solution set is the vertex input set and the workset is created by selecting the active vertices.

The three functions: gather, sum and apply are user-defined functions wrapped in map, reduce and join operators respectively. In each superstep, the active vertices are joined with the edges in order to create neighborhoods for each vertex. The gather function is then applied on the neighborhood values via a map function. Afterwards, the result is grouped by the vertex ID and reduced using the sum function. Finally, the outcome of the sum phase is joined with the current vertex values (solution set), the values are updated, thus creating a new workset that serves as input for the next iteration. 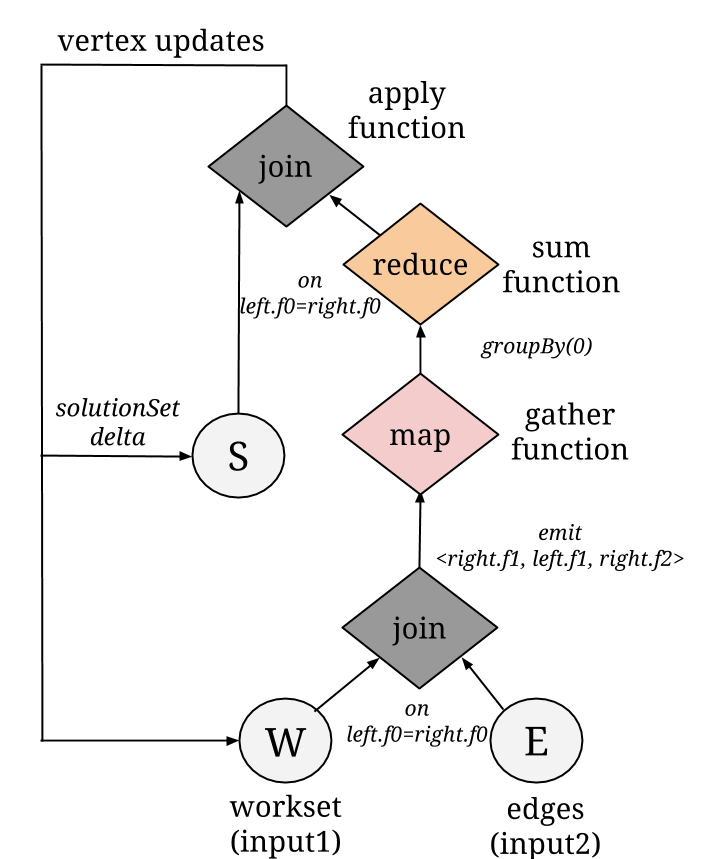 We are building a library of graph algorithms in Gelly, to easily analyze large-scale graphs. These algorithms extend the GraphAlgorithm interface and can be simply executed on the input graph by calling a run() method.

We currently have implementations of the following algorithms:

Gelly also offers implementations of common graph algorithms through examples. Among them, one can find graph weighting schemes, like Jaccard Similarity and Euclidean Distance Weighting, as well as computation of common graph metrics.

In the following section, we go through a use-case scenario that combines the Flink DataSet API with Gelly in order to process users’ music preferences to suggest additions to their playlist.

First, we read a user’s music profile which is in the form of user-id, song-id and the number of plays that each song has. We then filter out the list of songs the users do not wish to see in their playlist. Then we compute the top songs per user (i.e. the songs a user listened to the most). Finally, as a separate use-case on the same data set, we create a user-user similarity graph based on the common songs and use this resulting graph to detect communities by calling Gelly’s Label Propagation library method.

Note: The code snippets in this post try to reduce verbosity by skipping type parameters of generic functions. Please have a look at the full example for the correct and complete code.

After reading the (user-id, song-id, play-count) triplets from a CSV file and after parsing a text file in order to retrieve the list of songs that a user would not want to include in a playlist, we use a coGroup function to filter out the mismatches.

The coGroup simply takes the triplets whose song-id (second field) matches the song-id from the mismatches list (first field) and if the iterator was empty for a certain triplet, meaning that there were no mismatches found, the triplet associated with that song is collected.

Compute the Top Songs per User

As a next step, we would like to see which songs a user played more often. To this end, we build a user-song weighted, bipartite graph in which edge source vertices are users, edge target vertices are songs and where the weight represents the number of times the user listened to that certain song.

Consult the Gelly guide for guidelines on how to create a graph from a given DataSet of edges or from a collection.

To retrieve the top songs per user, we call the groupReduceOnEdges function as it perform an aggregation over the first hop neighborhood taking just the edges into consideration. We will basically iterate through the edge value and collect the target (song) of the maximum weight edge.

Clustering users based on common interests, in this case, common top songs, could prove to be very useful for advertisements or for recommending new musical compilations. In a user-user graph, two users who listen to the same song will simply be linked together through an edge as depicted in the figure below. 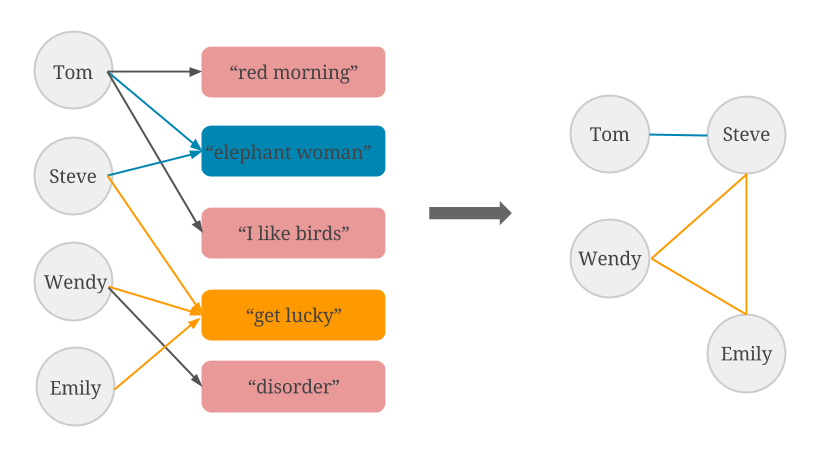 To form the user-user graph in Flink, we will simply take the edges from the user-song graph (left-hand side of the image), group them by song-id, and then add all the users (source vertex ids) to an ArrayList.

We then match users who listened to the same song two by two, creating a new edge to mark their common interest (right-hand side of the image).

Afterwards, we perform a distinct() operation to avoid creation of duplicate data. Considering that we now have the DataSet of edges which present interest, creating a graph is as straightforward as a call to the Graph.fromDataSet() method.

After having created a user-user graph, it would make sense to detect the various communities formed. To do so, we first initialize each vertex with a numeric label using the joinWithVertices() function that takes a data set of Tuple2 as a parameter and joins the id of a vertex with the first element of the tuple, afterwards applying a map function. Finally, we call the run() method with the LabelPropagation library method passed as a parameter. In the end, the vertices will be updated to contain the most frequent label among their neighbors.

Currently, Gelly matches the basic functionalities provided by most state-of-the-art graph processing systems. Our vision is to turn Gelly into more than “yet another library for running PageRank-like algorithms” by supporting generic iterations, implementing graph partitioning, providing bipartite graph support and by offering numerous other features.

We are also enriching Flink Gelly with a set of operators suitable for highly skewed graphs as well as a Graph API built on Flink Streaming.

In the near future, we would like to see how Gelly can be integrated with graph visualization tools, graph database systems and sampling techniques.

Curious? Read more about our plans for Gelly in the roadmap.