To automatically decide parallelism of operators, you need to:

Configure to use adaptive batch scheduler

To use adaptive batch scheduler, you need to set configurations as below:

In addition, there are several related configuration options to control the upper bounds and lower bounds of tuned parallelisms, to specify expected data volume to process by each operator, and to specify the default parallelism of sources. More details can be found in the feature documentation page.

Set the parallelism of operators to -1

In this section, we will elaborate the details of the implementation. Before that, we need to briefly introduce some concepts involved:

The details will be introduced in the following sections. 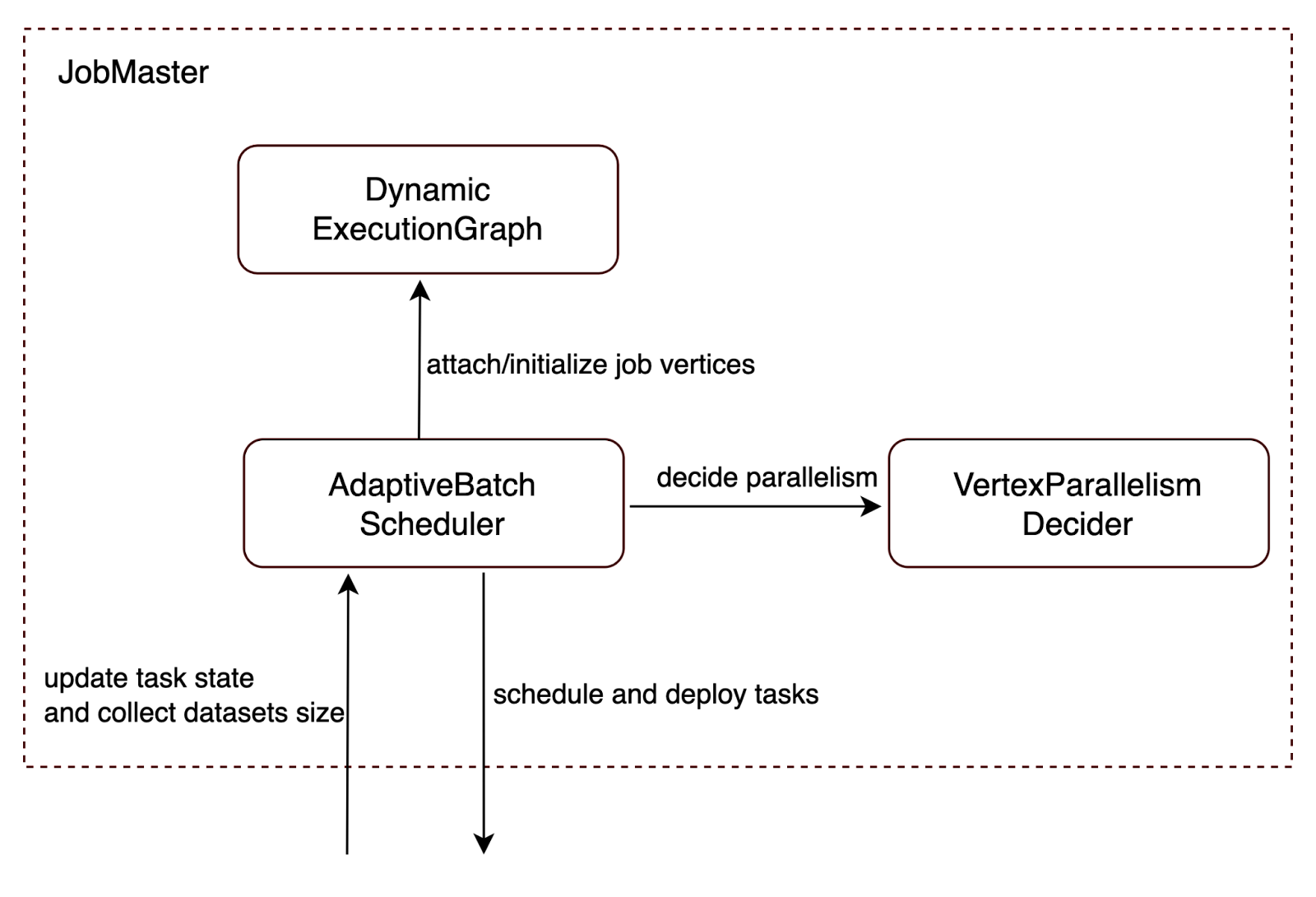 We introduced a new component VertexParallelismDecider to compute proper parallelisms of job vertices according to the sizes of their consumed results. The computation algorithm is as follows:

then the parallelism of this job vertex P will be:

Note that we introduced two special treatment in the above formula :

Generally, the broadcast dataset is usually relatively small against the other co-processed datasets, so we set the maximum ratio to 0.5 by default. The value is hard coded in the first version, and we may make it configurable later.

Normalize the parallelism to the closest power of 2

The normalize is to avoid introducing data skew. To better understand this section, we suggest you read the Flexible subpartition mapping section first.

Note that this is a temporary solution, the ultimate solution would be the Auto-rebalancing of workloads, which may come soon.

A dynamic execution graph means that a Flink job starts with an empty execution topology, and then gradually attaches vertices during job execution, as shown in Fig. 2. 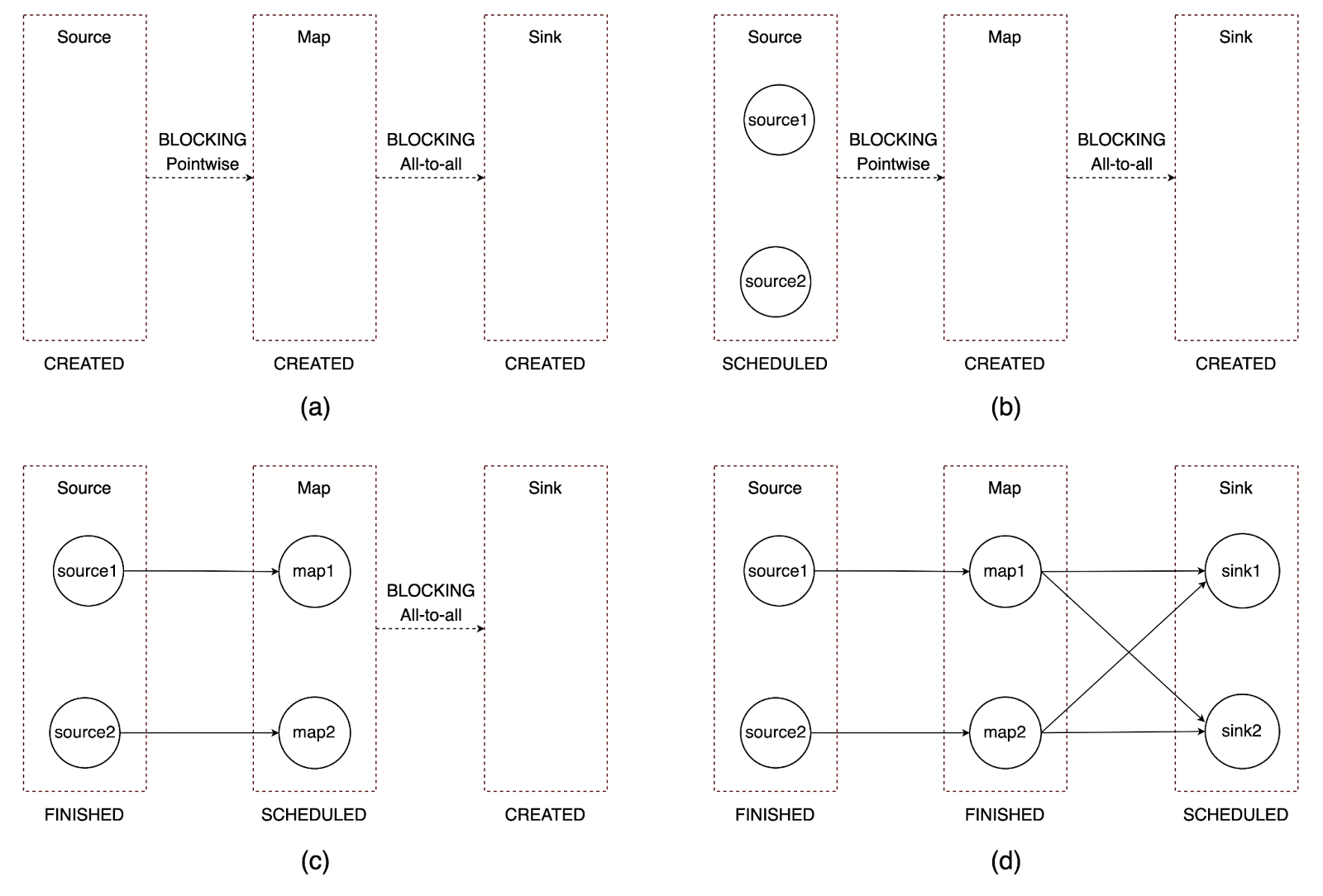 Before the adaptive batch scheduler was introduced to Flink, when deploying a task, Flink needed to know the parallelism of its consumer job vertex. This is because consumer vertex parallelism is used to decide the number of subpartitions produced by each upstream task. The reason behind that is, for one result partition, different subpartitions serve different consumer execution vertices. More specifically, one consumer execution vertex only consumes data from subpartition with the same index. 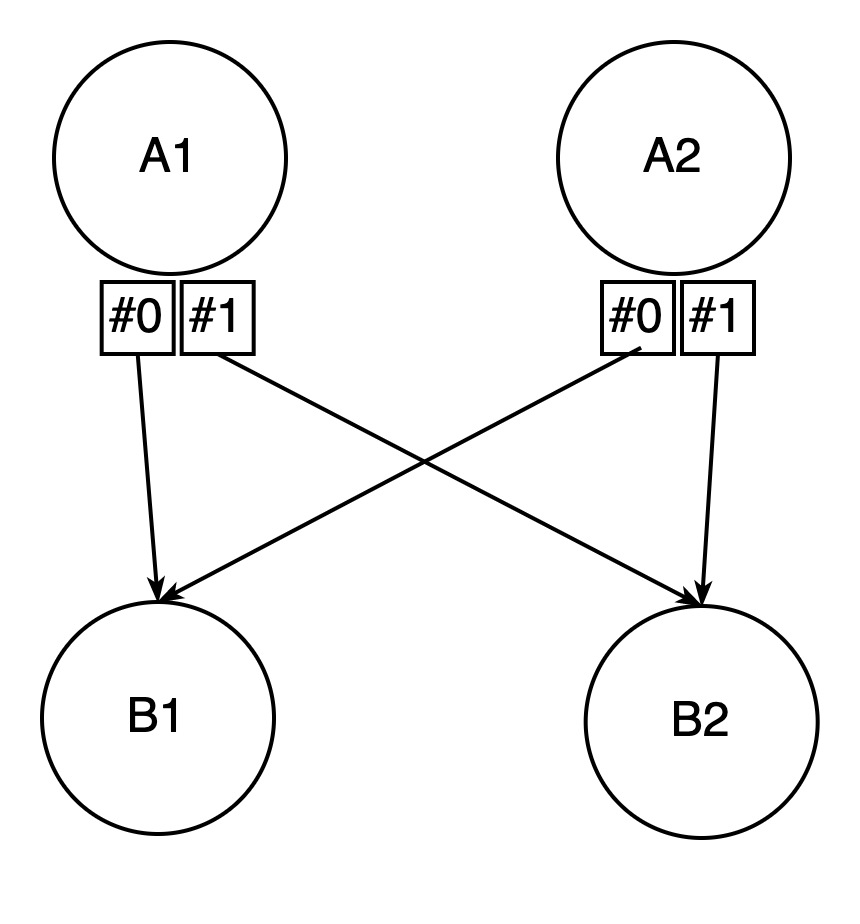 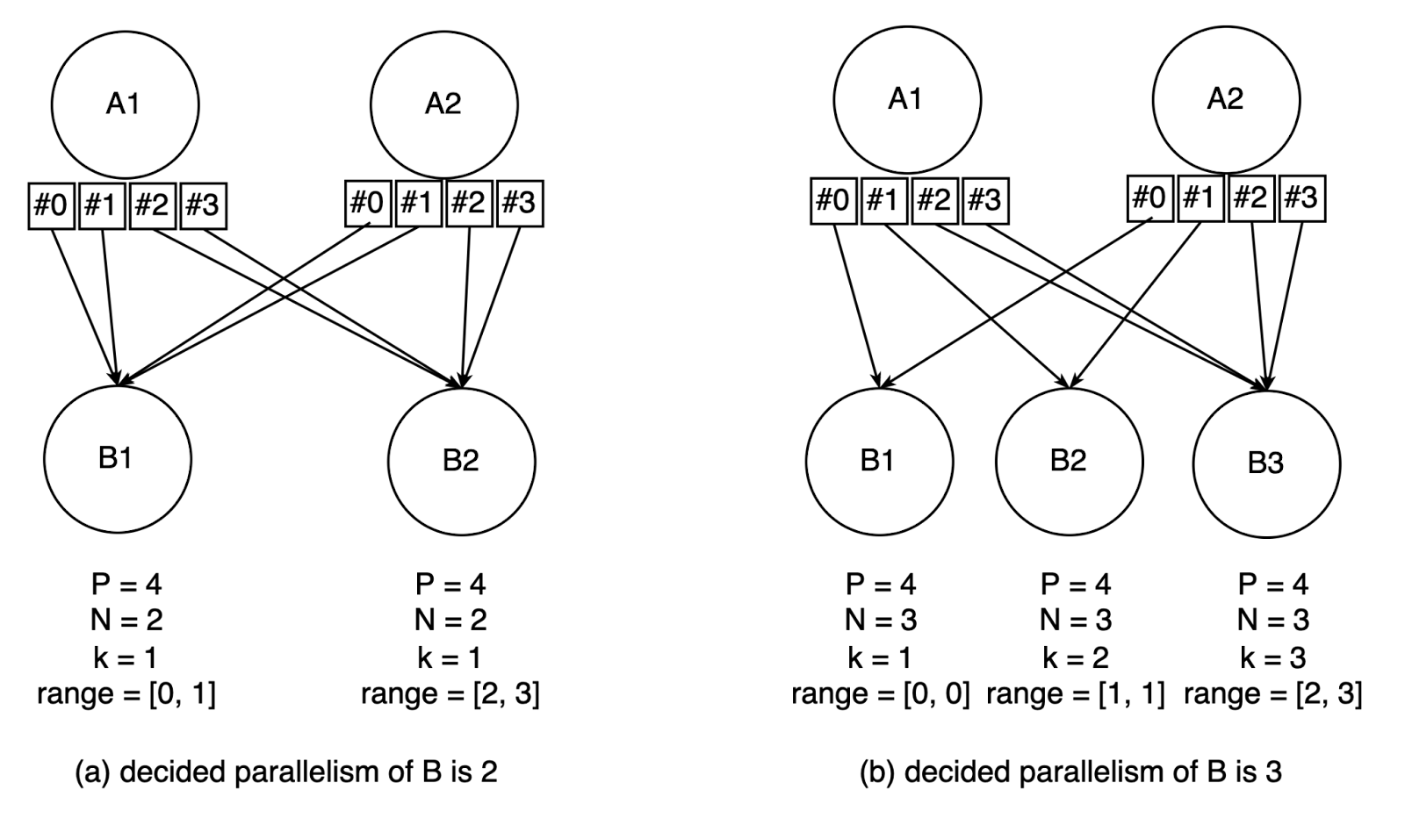 The adaptive batch scheduler scheduling is similar to the default scheduler, the only difference is that an empty dynamic execution graph will be generated initially and vertices will be attached later. Before handling any scheduling event, the scheduler will try deciding the parallelisms of job vertices, and then initialize them to generate execution vertices, connecting execution edges, and update the execution graph.

The scheduler will try to decide the parallelism of all job vertices before handling each scheduling event, and the parallelism decision will be made for each job vertex in topological order:

After deciding the parallelism, the scheduler will try to initialize the job vertices in topological order. A job vertex that can be initialized should meet the following conditions:

When running batch jobs, data skew may occur (a task needs to process much larger data than other tasks), which leads to long-tail tasks and further slows down the finish of jobs. Users usually hope that the system can automatically solve this problem. One typical data skew case is that some subpartitions have a significantly larger amount of data than others. This case can be solved by finer grained subpartitions and auto-rebalancing of workload. The work of the adaptive batch scheduler can be considered as the first step towards it, because the requirements of auto-rebalancing are similar to adaptive batch scheduler, they both need the support of dynamic graphs and the collection of result partitions size. Based on the implementation of adaptive batch scheduler, we can solve the above problem by increasing max parallelism (for finer grained subpartitions) and simply changing the subpartition range division algorithm (for auto-rebalancing). In the current design, the subpartition range is divided according to the number of subpartitions, we can change it to divide according to the amount of data in subpartitions, so that the amount of data within each subpartition range can be approximately the same. In this way, workloads of downstream tasks can be balanced.