Improvements in task scheduling for batch workloads in Apache Flink 1.12

The Flink community has been working for some time on making Flink a truly unified batch and stream processing system. Achieving this involves touching a lot of different components of the Flink stack, from the user-facing APIs all the way to low-level operator processes such as task scheduling. In this blogpost, we’ll take a closer look at how far the community has come in improving scheduling for batch workloads, why this matters and what you can expect in the Flink 1.12 release with the new pipelined region scheduler.

Flink has an internal scheduler to distribute work to all available cluster nodes, taking resource utilization, state locality and recovery into account. How do you write a scheduler for a unified batch and streaming system? To answer this question, let’s first have a look into the high-level differences between batch and streaming scheduling requirements.

Because there are no finite intermediate results, a streaming job always has to be restarted fully from a checkpoint or a savepoint in case of failure.

Note A streaming job may generally consist of multiple disjoint pipelines which can be restarted independently. Hence, the full job restart is not required in this case but you can think of each disjoint pipeline as if it were a separate job.

In contrast to streaming jobs, batch jobs usually consist of one or more stages that can have dependencies between them. Each stage will only run for a finite amount of time and produce some finite output (i.e. at some point, the batch job will be finished). Independent stages can run in parallel to improve execution time, but for cases where there are dependencies between stages, a stage may have to wait for upstream results to be produced before it can run. These are called blocking results, and in this case stages cannot run in parallel.

As an example, in the figure above Stage 0 and Stage 1 can run simultaneously, as there is no dependency between them. Stage 3, on the other hand, can only be scheduled once both its inputs are available. There are a few implications from this:

Scheduling Strategies in Flink before 1.12

Given these differences, a unified scheduler would have to be good at resource management for each individual stage, be it finite (batch) or infinite (streaming), and also across multiple stages. The existing scheduling strategies in older Flink versions up to 1.11 have been largely designed to address these concerns separately.

This strategy is the simplest: Flink just tries to allocate resources and deploy all subtasks at once. Up to Flink 1.11, this is the scheduling strategy used for all streaming jobs. For batch jobs, using “all at once” scheduling would lead to suboptimal resource utilization, since it’s unlikely that such jobs would require all resources upfront, and any resources allocated to subtasks that could not run at a given moment would be idle and therefore wasted.

To account for blocking results and make sure that no consumer is deployed before their respective producers are finished, Flink provides a different scheduling strategy for batch workloads. “Lazy from sources” scheduling deploys subtasks only once all their inputs are ready. This strategy operates on each subtask individually; it does not identify all subtasks which can (or have to) run at the same time.

Let’s take a closer look at the specific case of batch jobs, using as motivation a simple SQL query:

Assume that two tables were created in some database: the customers table is relatively small and fits into the local memory (or also on disk). The orders table is bigger, as it contains all orders created by customers, and doesn’t fit in memory. To enrich the orders with the customer name, you have to join these two tables. There are basically two stages in this batch job:

The batch job described above will have three operators. For simplicity, each operator is represented with a parallelism of 1, so the resulting ExecutionGraph will consist of three subtasks: A, B and C.

This translates into A and C being connected with a blocking data exchange, because the customers table needs to be loaded locally (A) before we start processing the order table (B). B and C are connected with a pipelined data exchange, because the consumer (C) can run as soon as the first result records from B have been produced. You can think of B->C as a finite streaming job. It’s then possible to identify two separate stages within the ExecutionGraph: A and B->C.

Imagine that the cluster this job will run in has only one slot and can therefore only execute one subtask. If Flink deploys B chained with C first into this one slot (as B and C are connected with a pipelined edge), C cannot run because A has not produced its blocking result yet. Flink will try to deploy A and the job will fail, because there are no more slots. If there were two slots available, Flink would be able to deploy A and the job would eventually succeed. Nonetheless, the resources of the first slot occupied by B and C would be wasted while A was running.

Both scheduling strategies available as of Flink 1.11 (“all at once” and “lazy from source”) would be affected by these limitations. What would be the optimal approach? In this case, if A was deployed first, then B and C could also complete afterwards using the same slot. The job would succeed even if only a single slot was available.

Note If we could load the orders table into local memory (making B -> C blocking), then the previous strategy would also succeed with one slot. Nonetheless, we would have to allocate a lot of resources to accommodate the table locally, which may not be required.

Last but not least, let’s consider what happens in the case of failover: if the processing of the orders table fails (B->C), then we do not have to reload the customer table (A); we only need to restart B->C. This did not work prior to Flink 1.9.

To satisfy the scheduling requirements for batch and streaming and overcome these limitations, the Flink community has worked on a new unified scheduling and failover strategy that is suitable for both types of workloads: pipelined region scheduling.

As you read in the previous introductory sections, an optimal scheduler should efficiently allocate resources for the sub-stages of the pipeline, finite or infinite, running in a streaming fashion. Those stages are called pipelined regions in Flink. In this section, we will take a deeper dive into pipelined region scheduling and failover. 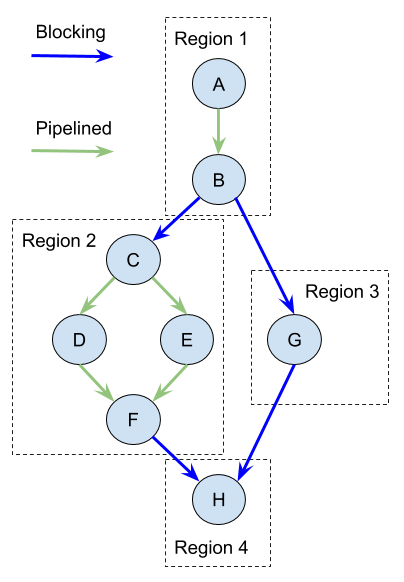 Note (out of scope) In certain cases the subtasks can be connected by blocking data exchanges within one region. Check FLINK-17330 for details.

As mentioned before, only certain regions are running at the same time. Others have already produced their blocking results. The results are stored locally in TaskManagers where the corresponding subtasks run. If a currently running region fails, it gets restarted to consume its inputs again. If some input results got lost (e.g. the hosting TaskManager failed as well), Flink will rerun their producing regions. You can read more about this effort in the user documentation and the original FLIP-1 proposal.

The subtasks of a pipelined region are deployed only when all necessary conditions for their success are fulfilled: inputs are ready and all needed resources are allocated. Hence, the batch job never gets stuck without notifying the user. The job either eventually finishes or fails after a timeout.

Depending on how the subtasks are allowed to share slots, it is often the case that the whole pipelined region can run within one slot, making it generally possible to run the whole batch job with only a single slot. At the same time, if the cluster provides more resources, Flink will run as many regions as possible in parallel to improve the overall job performance.

As mentioned in the definition of pipelined region, all its subtasks have to run simultaneously. The subtasks of other regions either cannot or do not have to run at the same time. This means that a pipelined region is the minimum subgraph of a batch job’s ExecutionGraph that has to be scheduled at once. There is no way to run the job with fewer resources than needed to run the largest region, and so there can be no resource waste.

Note (out of scope) The amount of resources required to run a region can be further optimized separately. It depends on co-location constraints and slot sharing groups of the region’s subtasks. Check FLINK-18689 for details.

Scheduling is a fundamental component of the Flink stack. In this blogpost, we recapped how scheduling affects resource utilization and failover as a part of the user experience. We described the limitations of Flink’s old scheduler and introduced a new approach to tackle them: the pipelined region scheduler, which ships with Flink 1.12. The blogpost also explained how pipelined region failover (introduced in Flink 1.11) works.

Stay tuned for more improvements to scheduling in upcoming releases. If you have any suggestions or questions for the community, we encourage you to sign up to the Apache Flink mailing lists and become part of the discussion.

A Flink job is a pipeline of connected operators to process data. Together, the operators form a JobGraph. Each operator has a certain number of subtasks executed in parallel. The subtask is the actual execution unit in Flink. Each subtask can consume user records from other subtasks (inputs), process them and produce records for further consumption by other subtasks (outputs) down the stream. There are source subtasks without inputs and sink subtasks without outputs. Hence, the subtasks form the nodes of the ExecutionGraph.

There are also two major data-exchange types to produce and consume results by operators and their subtasks: pipelined and blocking. They are basically types of edges in the ExecutionGraph.

A TaskManager instance has a certain number of virtual slots. Each slot represents a certain part of the TaskManager’s physical resources to run the operator subtasks, and each subtask is deployed into a slot of the TaskManager. A slot can run multiple subtasks from different operators at the same time, usually chained together.

Scheduling in Flink is a process of searching for and allocating appropriate resources (slots) from the TaskManagers to run the subtasks and produce results. The scheduling strategy reacts on scheduling events (like start job, subtask failed or finished etc) to decide which subtask to deploy next.