A Practical Guide to Broadcast State in Apache Flink

Since version 1.5.0, Apache Flink features a new type of state which is called Broadcast State. In this post, we explain what Broadcast State is, and show an example of how it can be applied to an application that evaluates dynamic patterns on an event stream. We walk you through the processing steps and the source code to implement this application in practice.

What is Broadcast State?

The Broadcast State can be used to combine and jointly process two streams of events in a specific way. The events of the first stream are broadcasted to all parallel instances of an operator, which maintains them as state. The events of the other stream are not broadcasted but sent to individual instances of the same operator and processed together with the events of the broadcasted stream. The new broadcast state is a natural fit for applications that need to join a low-throughput and a high-throughput stream or need to dynamically update their processing logic. We will use a concrete example of the latter use case to explain the broadcast state and show its API in more detail in the remainder of this post.

Imagine an e-commerce website that captures the interactions of all users as a stream of user actions. The company that operates the website is interested in analyzing the interactions to increase revenue, improve the user experience, and detect and prevent malicious behavior. The website implements a streaming application that detects a pattern on the stream of user events. However, the company wants to avoid modifying and redeploying the application every time the pattern changes. Instead, the application ingests a second stream of patterns and updates its active pattern when it receives a new pattern from the pattern stream. In the following, we discuss this application step-by-step and show how it leverages the broadcast state feature in Apache Flink. 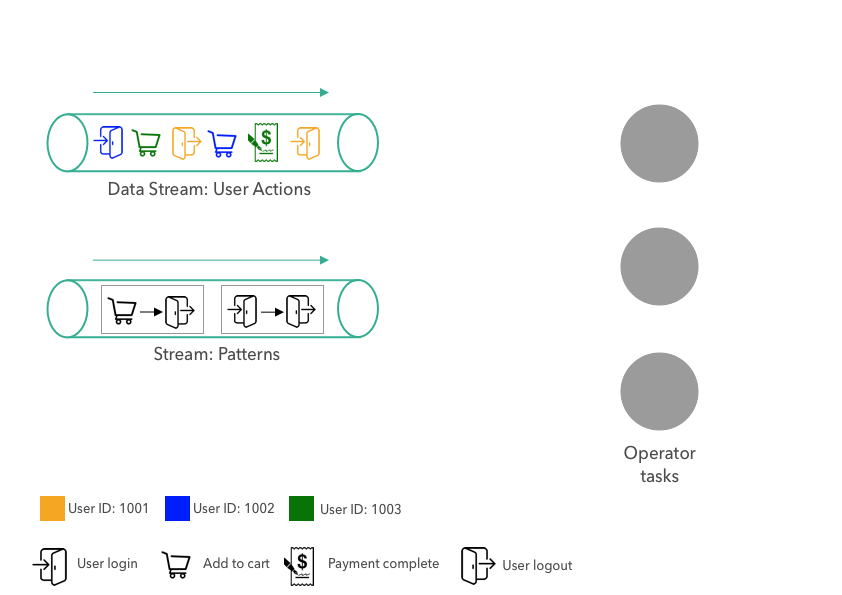 Our example application ingests two data streams. The first stream provides user actions on the website and is illustrated on the top left side of the above figure. A user interaction event consists of the type of the action (user login, user logout, add to cart, or complete payment) and the id of the user, which is encoded by color. The user action event stream in our illustration contains a logout action of User 1001 followed by a payment-complete event for User 1003, and an “add-to-cart” action of User 1002.

The second stream provides action patterns that the application will evaluate. A pattern consists of two consecutive actions. In the figure above, the pattern stream contains the following two:

Such patterns help a business in better analyzing user behavior, detecting malicious actions, and improving the website experience. For example, in the case of items being added to a shopping cart with no follow up purchase, the website team can take appropriate actions to understand better the reasons why users don’t complete a purchase and initiate specific programs to improve the website conversion (such as providing discount codes, limited free shipping offers etc.)

On the right-hand side, the figure shows three parallel tasks of an operator that ingest the pattern and user action streams, evaluate the patterns on the action stream, and emit pattern matches downstream. For the sake of simplicity, the operator in our example only evaluates a single pattern with exactly two subsequent actions. The currently active pattern is replaced when a new pattern is received from the pattern stream. In principle, the operator could also be implemented to evaluate more complex patterns or multiple patterns concurrently which could be individually added or removed.

We will describe how the pattern matching application processes the user action and pattern streams. 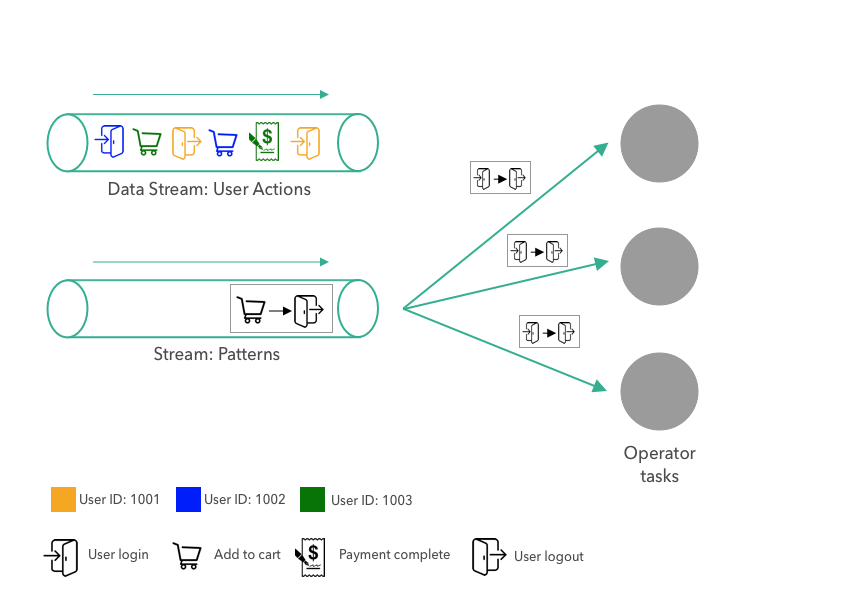 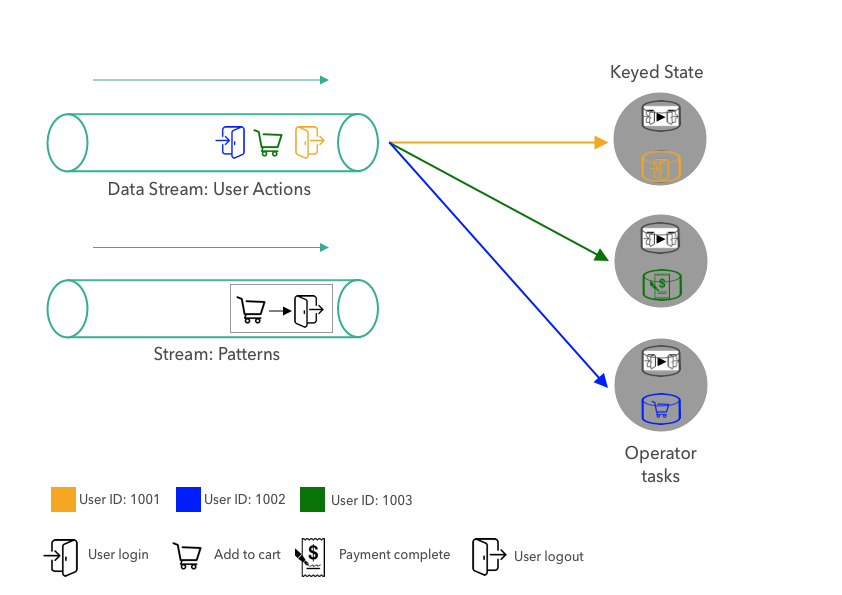 When a task receives a new user action, it evaluates the currently active pattern by looking at the user’s latest and previous actions. For each user, the operator stores the previous action in the keyed state. Since the tasks in the figure above only received a single action for each user so far (we just started the application), the pattern does not need to be evaluated. Finally, the previous action in the user’s keyed state is updated to the latest action, to be able to look it up when the next action of the same user arrives. 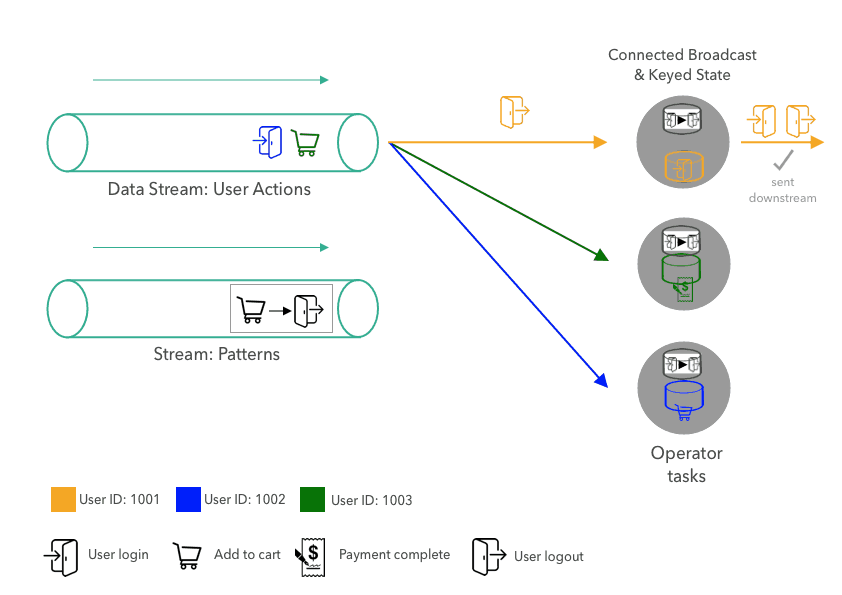 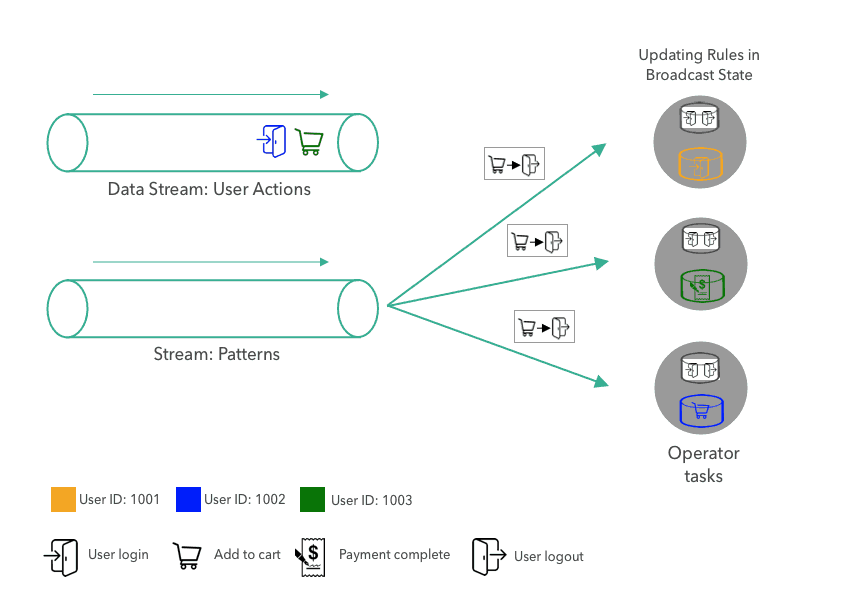 When a new pattern arrives in the pattern stream, it is broadcasted to all tasks and each task updates its broadcast state by replacing the current pattern with the new one. 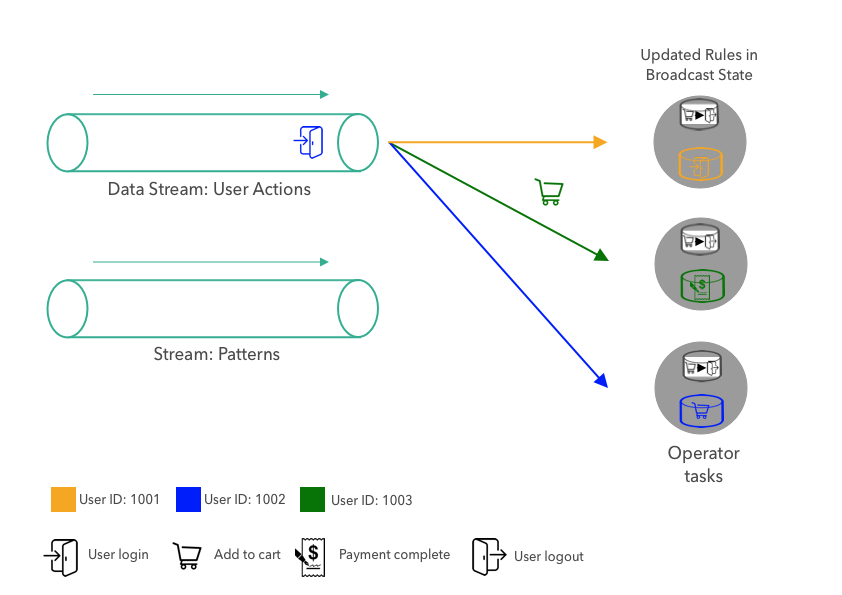 Once the broadcast state is updated with a new pattern, the matching logic continues as before, i.e., user action events are partitioned by key and evaluated by the responsible task.

How to Implement an Application with Broadcast State?

Let’s start with the input data of the application. We have two data streams, actions, and patterns. At this point, we don’t really care where the streams come from. The streams could be ingested from Apache Kafka or Kinesis or any other system. Action and Pattern are Pojos with two fields each:

Action and Pattern are Pojos with two fields each:

As a first step, we key the action stream on the userId attribute.

Next, we prepare the broadcast state. Broadcast state is always represented as MapState, the most versatile state primitive that Flink provides.

Since our application only evaluates and stores a single Pattern at a time, we configure the broadcast state as a MapState with key type Void and value type Pattern. The Pattern is always stored in the MapState with null as key.

Using the MapStateDescriptor for the broadcast state, we apply the broadcast() transformation on the patterns stream and receive a BroadcastStream bcedPatterns.

After we obtained the keyed actionsByUser stream and the broadcasted bcedPatterns stream, we connect() both streams and apply a PatternEvaluator on the connected streams. PatternEvaluator is a custom function that implements the KeyedBroadcastProcessFunction interface. It applies the pattern matching logic that we discussed before and emits Tuple2<Long, Pattern> records which contain the user id and the matched pattern.

The KeyedBroadcastProcessFunction has full access to Flink state and time features just like any other ProcessFunction and hence can be used to implement sophisticated application logic. Broadcast state was designed to be a versatile feature that adapts to different scenarios and use cases. Although we only discussed a fairly simple and restricted application, you can use broadcast state in many ways to implement the requirements of your application.

In this blog post, we walked you through an example application to explain what Apache Flink’s broadcast state is and how it can be used to evaluate dynamic patterns on event streams. We’ve also discussed the API and showed the source code of our example application.

We invite you to check the documentation of this feature and provide feedback or suggestions for further improvements through our mailing list.